The challenges of health care in the Americas 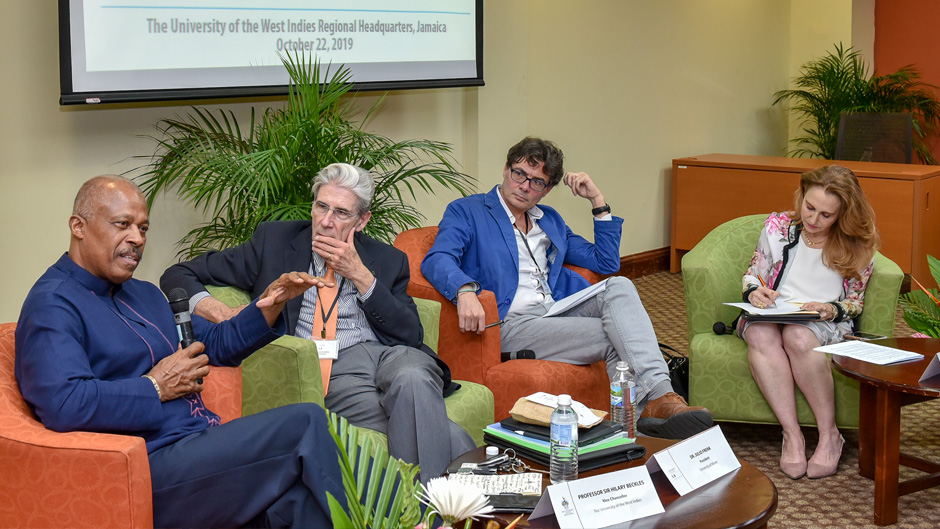 A panel of experts discussed the complicated situation of health care throughout the Americas during a recent roundtable gathering.

During a recent roundtable discussion titled, “Challenges to Health and Wellbeing in the Americas: Next Steps in Health System Reform,” a panel of experts examined the topic and potential opportunities and challenges that exist to bring health care to people living in countries throughout the Americas.

“Health system reform is an ongoing process, but recently—particularly in the Americas—we have seen that politics has trumped the population needs,” said Felicia Knaul, director of the University of Miami Institute for Advanced Study of the Americas, who moderated the panel discussion.

“We have seen several decades of accumulated knowledge and reforms, particularly in Mexico and Colombia,” she added. “These reforms face technical challenges as population needs grow.”

The roundtable discussion was held Oct. 22 in Kingston, Jamaica, as part of a meeting of the Hemispheric University Consortium, a coalition of 14 universities, including the University of Miami, that is committed to collaborative research to seek solutions to some of the region’s most pressing problems involving climate change, public health, entrepreneurship, crime, and technology.

The Institute for Advanced Study of the Americas is the research partner of the consortium, which was formed in 2018. During its meetings representatives of the HUC member institutions agreed to contribute toward establishment of a collaborative research program bridging institutions. Member universities will establish a fund, based at their institution, to support researchers collaborating with others in the consortium.

The panel included Alejandro Gaviria, an economist and president of Universidad de los Andes in Bogota, Colombia; Julio Frenk, a physician, public health expert, University of Miami president and former minister of health in Mexico; and Hilary Beckles, historian and vice chancellor of the University of the West Indies.

Gaviria, who was minister of health for six years in Colombia, acknowledged that he had the paradoxical circumstance of also being a cancer patient during that time. “So, I had the privilege of being a patient and minister of health at the same time,” he said.

He saw “many reasons to be optimistic” about health care in Latin America. He cited the reasons why:

Gaviria acknowledged that the challenges to health care and health care reform are rising because of increased expectations from the public and the continuing rising costs of health care.

New technological advances in medical treatments make it more expensive to provide government subsidized care, he said. As an example, Gaviria said the typical treatment for a cancer patient 20 years ago was $1000 a month. The same treatment now is $10,000 a month.

“How do you pay for that?” he said, adding that in Colombia it is difficult to have an honest debate about the rising cost of health care costs because of rising expectations from the public.

Frenk, speaking from the perspective of a medical doctor, policy expert as the former minister of health in Mexico, and the head of an academic research university, said that his experience in both academia and in the “policy world” has taught him that it is crucial for most health policies to be based on work done in the academic arena.

Beckles gave a moving historical narrative on why black people in the Caribbean today, many of whom are descendents of slavery, are among the “sickest people in the world. We have a pandemic of chronic diseases: hypertension, diabetes, obesity,” he said.  “A pandemic that is quite frankly overwhelming.”

Beckles said that although the medical profession in his country tend to blame the diseases on a growing “middle class” lifestyle with changing dietary patterns and such, his training as a historian gives him a different view. He said the slave trade that brought over 6 million Africans to sugar plantations in the islands set the stage for those ailments.