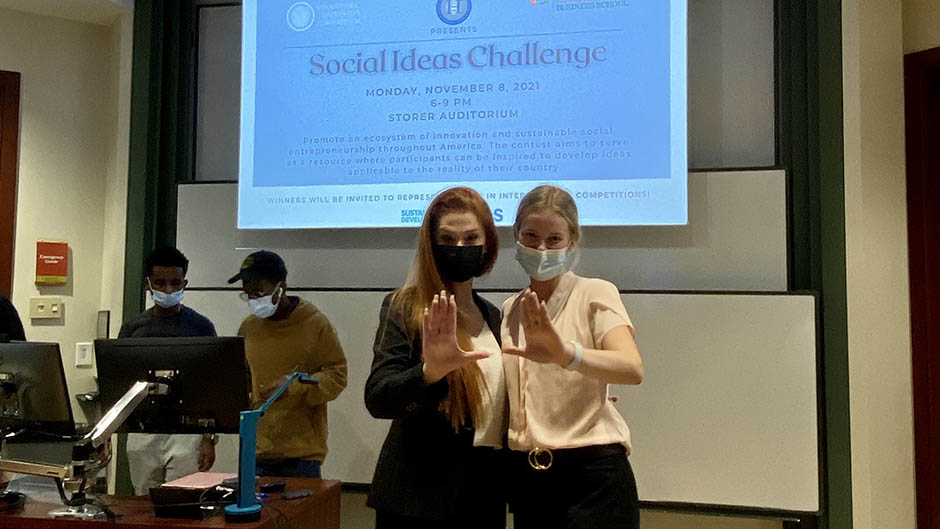 An idea to combat sex trafficking wins among University of Miami teams competing in the first hemispheric Social Ideas Challenge.

Six Hemispheric University Consortium universities from across the Americas have come together to offer the first Social Ideas Challenge, a competition challenging students to propose ideas that address some of the social issues under the United Nations Sustainable Development Goals. The contest motivates young future leaders to develop entrepreneurial skills and discover that resolving societal problems lies within their reach.

“The initiative is about ensuring that students look at the world from a perspective of both seeing the challenges and feeling empowered to do something about them,” says Cecilia Sanchez, international relations manager at Miami Herbert Business School. “We want our next generation of leaders to know that they can contribute real solutions.”

Currently, in the first phase of the contest, student teams compete locally within their respective participating institutions, which include Universidad Austral in Argentina, Universidad Andrés Bello and Pontificia Universidad Católica in Chile, Universidad San Francisco de Quito in Ecuador, and Tec de Monterrey in Mexico, in addition to the University of Miami. The winning team from each local competition then moves on to the finals, likely to take place at Miami’s prominent eMerge Americas tech conference, which will return as a live event in mid-April after this year’s cancellation due to the COVID-19 pandemic.

The academic program team at Miami Herbert, led by Vice Dean Hari Natarajan, launched the local portion of the contest on Nov. 8 with a virtual event open to all university students, beyond only business school students to give any student willing to challenge themselves an opportunity to tap into their entrepreneurial spirit and tackle pressing social issues.

The winning team, comprised of Laura Hopman, a junior majoring in business analytics, legal studies, and management, and Alison Granirer, a sophomore majoring in accounting and legal studies, proposed “Kickback,” a plan to combat human trafficking by incorporating self-defense training into workout routines. Their concept would offer women the incentive of cardio group exercises while also gaining invaluable knowledge on how to potentially escape an attack or entrapment by sex traffickers.

“When you think of a traditional self-defense class, it is perhaps not as exciting as the thought of a workout class. We are making self-defense training fun and energetic by making it part of working out,” Hopman says.

As a critical element of their idea, revenue from gym membership in the United States, beginning in Houston for its high national level of trafficking incidence, would fund similar exercise classes in lower-income regions of Latin America, beginning in Mexico, for a “buy one membership, give one membership model,” as Granirer describes.

The team members became motivated to address human trafficking, particularly for sex slavery, upon noting the worldwide prevalence and impact of the crime – 40.3 million people were trafficked globally in 2016, as estimated by the International Labor Organization in its most recent Global Estimates of Modern Slavery Report. Of those trafficked for the sex trade, only one percent survive, according to the nonprofit Stopping Traffic.

“Beyond the business aspect of our idea, what we hope to do is spread awareness, which in itself can reduce the prevalence, since more widespread knowledge and awareness of the traps that traffickers use would hopefully deter perpetrators from continuing this act,” Granirer says.

The duo will be announced as the winners of the UM local competition during a closing event on Dec. 13. All local teams will gather for the congratulatory mixer, which will include international networking as the teams will connect virtually with participants from the Latin American universities with aligning project concepts.

“Connecting with their colleagues with similar interests in partner institutions can help build cooperative relationships and perhaps lead to future projects together,” Sanchez states. “Building global partnerships is exactly the type of result we would like to encourage.”

While allowing for potential collaboration among students, the Social Ideas Challenge nonetheless gears up for its international phase. Granirer and Hopman have already polished their proposal with the help of their coach, Professor of Management and Director of Entrepreneurship Initiatives Susan Amat. They will present their idea at the finals in April, when the first prize and runner-up teams will be selected.

For both students, the experience has allowed them to feel enabled as future entrepreneurs with strengthened awareness about a deeply impacting global issue.

“When we first approached the challenge, human trafficking seemed an issue much bigger than ourselves, but diving into it, we see that there is a lot we can contribute,” Hopman says. “It is an issue that we will be mindful of in any endeavors that we go on to take.”

To learn more about the Social Ideas Challenge and the global initiatives Miami Herbert is involved in, please click here.